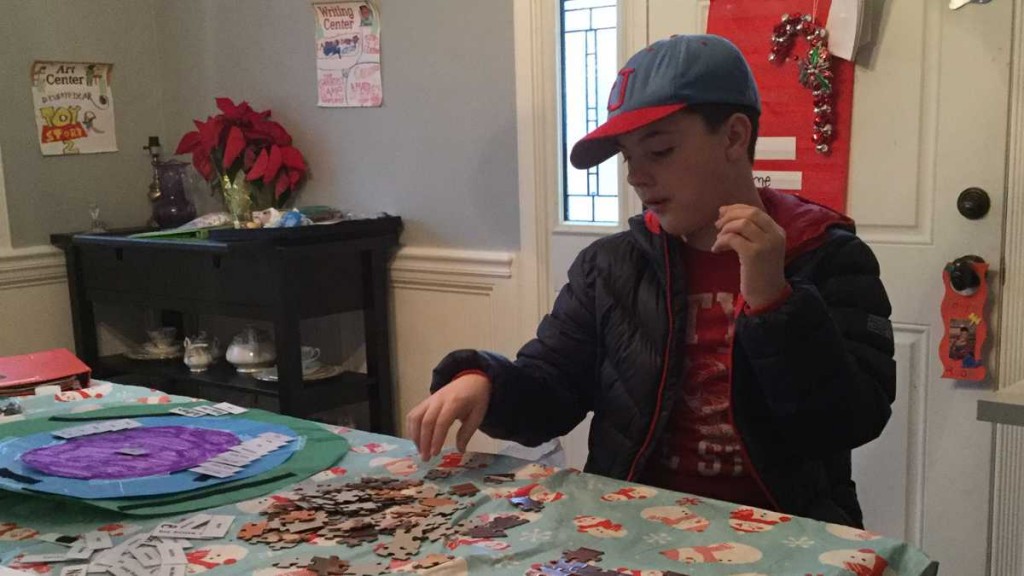 photo: Anthony Burke takes a puzzle break from his applied behavioral analysis - or ABA therapy - in his dining room. (Kyrie Greenberg/ for NewsWorks)

In November, a Pennsylvania Superior Court ruled in favor of a the student's family who sued Independence Blue Cross for not covering autism support care for their son once he entered school. The insurer appealed for the ruling to be reheard, but just this week the court rejected that.

The suit originated when Anthony Burke started kindergarten in 2009. His father worked nights as a Philadelphia police officer so he could be in the classroom all day as his son's assistant. Why? Because his family's health insurance wouldn't cover Anthony's applied behavioral analysis (ABA therapy), when he was in school.

ABA therapy is a top recommendation for medical treatment of autism's effects, and falls under the state's Autism Insurance Act. And after a five year long lawsuit, the Superior Court sided with the Burke family that the insurer should cover in-school ABA therapy.

David Gates from the Pennsylvania Health Law Project, who represents the Burkes, says Blue Cross could ask the Supreme Court to allow another appeal. But now he is working with service providers to determine which other kids might be eligible for help in school. "I would hope that the state would look into this and be sure that the other insurers are covering services in schools," Gates said.

Blue Cross wouldn't comment on the litigation, but says it pays for ABA services in a variety of settings, but not in schools.

"For a long time, it was well known that insurers would not pay for services in schools. And providers sort of stopped trying," she said.

Anthony is now 12, and his dad, John, emphasizes that the family's lawsuit doesn't include a price tag.

"We never filed anything in court that said we wanted to be compensated for anything. All we want are the services to be provided by the insurance company like they are supposed to," he said.